We always plan to get up at a certain time and get going and plan our day out. Well, we never actually get up and going when we plan to. We were about an hour behind our schedule and today had lots to do packed into it. We started with the free hotel breakfast overlooking the falls; again breathtaking views. It was a really good free meal, except you apparently have to ask for cheese to be added to your omelette, it’s not a given in Canada…

We checked out and took the Incline to the Falls ride to start our Journey Behind the Falls. We bought a pass through Niagara Parks that got us into the Behind the Falls, Niagara’s Fury and the Butterfly Conservatory. Behind the Falls was 125 ft down and a couple tunnels that went literally behind the falls. The sun actually peaked out for the first time since we arrived! We took lots of pics and headed to the Fury. It was a short video about the history of the falls then a simulated 360 experience. They gave us ponchos and I was a little worried about getting wet then having to go out in the cold. So of course I asked where to stand to get the least wet and not a drop hit me! From there we went to the observation decks and took a lot more photos and I even threw a quarter into the falls and made a wish. Cheesy, I know!

We decided to wrap it up at the falls and head to the Butterfly Conservatory. We didn’t think this would be “our sort of thing” but it was actually really interesting and there were so many butterflies, like hundreds, maybe even thousands!!

Guess what time it was next? WINE TIME! We made 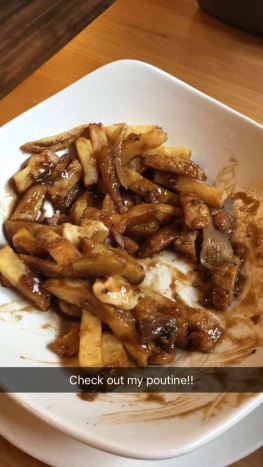 our way into Niagara-n-the-Lake. This was wine country and it was awesome! We started at Ice House Winery to see what this Canadian ice wine was all about. Look it up, because the way they make it is so interesting. They only get 1-2 drops of juice from each grape when harvesting!! That’s so little and so crazy! It was too sweet for my liking, but definitely a cool experience. Next stop was some poutine and Caroline Cellars happened to have some. It was pepper steak and onion poutine and it was ahh-mazing! Why hasn’t we tried this stuff sooner? And then I went on a wine sampling spree and bought a bottle there too! I wished I could have bought more, it was so cheap and delicious! This place was so beautiful that if we lived in the area, I would have loved to get married here. Maybe vow renewal??

I let Ben have his turn, so we headed to Silversmith Brewing which is in an old church. Super cool building. And like all other breweries in Canada, we loved the beer! Next was Oast House Brewers. Cute setting in a red barn, but I actually didn’t find  a beer I loved that warranted a full pint order. We didn’t spend much time here. There really wan’t any seating, lots of open standing room only. 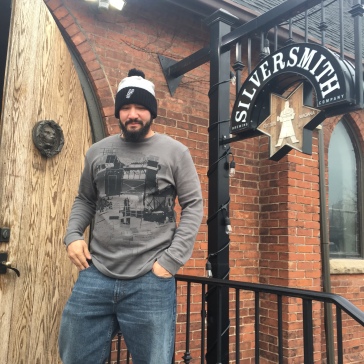 We’re in wine country, so let’s get back to wineries! We went to one that I can’t remember the name and they were about 15 minutes from closing so we snuck a quick tasting in. They made their own cider too that was really great! But the one we loved they only sold in growlers so we couldn’t get any to go 😦 Then we tried to go to a new winery that a waitress told us about but they were closed. Ugh!  So we headed to Konzelmann – a German winery. It was only $1 CAD per sample! Like serious, I love Canada, my money goes so much further.

So you’re probably think we are such lushes, and that’s ok. This is what we love to do, explore beer and wine in new lands! The sun had set and it was dark by the time we got to downtown NOTL. We went into The Exchange Brewery and had a cheese and beer flight. This place was two stories and had pinball games to play. I think I was starting to get tired and delirious by this point. We walked down to the lake but unfortunately couldn’t see much since it was pitch black out.

We left and headed to the outlet mall. I desperately wanted to find some UGG boots to take home. While I find some great deals, they didn’t have my size in anything! But of course Ben went home with two new pairs of UGGs, that bastard! Jk lol

It was only about 8:30pm at this point. We found parking back in Niagara Falls. As we were

walking to the ferris wheel, we found someone’s USA passport on the sidewalk!! Poor kid isn’t going home tonight!  We handed it over to the Info Station. Sucks to be him… We are now in the section of Niagara that I called “The Fun Street”. It was all lit up and lots of people and attractions. Haunted Houses are big here. We received two free passes to Screaming Tunnels so we went there. It was literally black hallways with a little red light you were to follow while two different people jumped out and screamed at you. I hid behind Ben the entire time and screamed a lot of profanities! It was stupid but fun. I would have never paid $15 per person though. Then we went on the ferris wheel. Pretty views from up there,
but your typical ride.

Now it was time to relax. We went to our last stop of the night. Niagara Brewing

Company. It felt more like a restaurant than a brewery, but nonetheless, good beer. By this point, I just wanted to take a shower and be in bed. It was a super long day!

At about 12:30am we decided to make our short tip back over the border to the US and wait at the airport. IAG airport is the tiniest thing ever, so it makes for easy check-in and getting through security. We had an hour to wait until our flight so we charged our phones and laid down and napped until we boarded.

This was an awesome mini vacation. Too awesome! (If that’s even possible) We literally packed a week’s worth of things to do into just 3 days. It will take me 3 days to feel back to normal…